The flower pot on the windowsill

Despite recent heavy winds my polypropylene and tubular aluminium “grow house” has been remarkably resilient providing shelter to plants before their move onto the allotment and giving vegetable and herb seedlings a chance to toughen up enough to stand a chance against the slugs.  This morning however, my complacency (And neglect to secure said structure to the fence as advised!) was shattered.  Rain had succeeded where wind alone failed,  and I woke to discover my grow house face down on top of a jumble of plants and seedlings.

On closer, and wet, inspection the damage wasn’t as bad as it first looked but it took me back with a jolt to a windy summer day in the early 1960s when I awoke to my first horticultural disaster.  The clay pot of nasturtiums I had been painstakingly tending on my second floor bedroom windowsill lay shattered far below in the basement ‘area’ of the printers shop above which we lived . 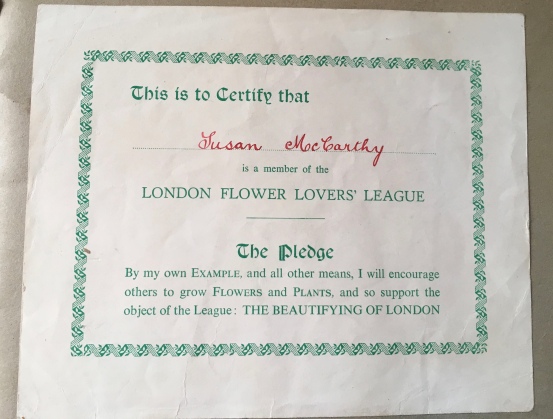 In the days when I was a pupil there, William Tyndale Junior School in Islington wasn’t known for its imaginative  curriculum (Though it had its moments later in the more radical 1970s.), so the advent of the London Flower Lovers’ League bulbs and seeds in Spring and Summer was really quite exciting.

The summer seeds were nasturtiums and candytuft.  My mother complained that the nasturtiums got blackly, but I preferred their bright colours and trailing flowers to the more sedate pink candytuft and always hoped that my small brown envelope would have nasturtium seeds in it.  Oddly, I don’t remember growing the bulbs (always daffodils) though I proudly pasted this  certificate into my scrapbook!

Some time ago, I looked up the London Flower Lovers League and was delighted to see that  it still exists, though since 1974 it has been called The London Children’s Flower Society. I read the 2014 Annual Report online and was pleased to note that my old primary school still takes part and earned a Silver Medal Award in the daffodil and hyacinth class.

Alice K Street, whose printed signature appeared on all the certificates, founded the Society in 1945 in order to provide London children with an opportunity for gardening in the grey post-war years. She ran the League from her own home in Orpington until her death in 1966, and started with the very modest idea of a daffodil competition, open to all the school children of London.  The bulbs would be grown in pots, if necessary on a window ledge, as mine were, or standing in any space available where there was enough light. The bulbs, and later seeds, were accompanied by short, simply-worded instructions for growing them.

The bulb competition still exists, but now the Society offers a wider range of seeds – flower and vegetable – in standard sized packets – no more tiny brown envelopes containing only ten or 12 seeds. It also has categories for perennial plants and whole school gardens with prizes as well as certificates.  Alice K Street’s name lives on in trophies awarded to schools, but surely she should be better known?

This entry was posted in Hidden Heroines, Hidden Plants, The Blog. Bookmark the permalink.

8 Responses to The flower pot on the windowsill