Posted on February 11, 2016 by Capital Walks in London

Much as I love the Barbican  it can seem pretty bleak, especially in the late afternoon of a grey February day. So it is always a pleasure to plan a route to the library that takes me past Dorothy Annan’s joyful celebration of British technology in the 1960s. 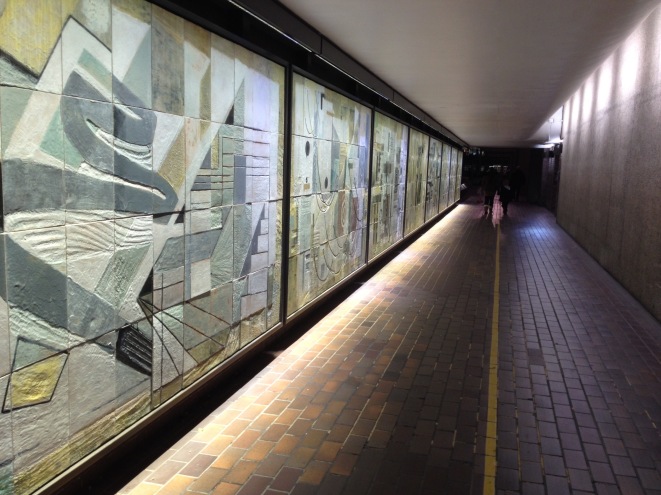 Now to be found on the Speed Highwalk between Speed House and the Barbican Centre, these nine beautifully crafted ceramic panels celebrate the “white heat” of 1960s communications technology. 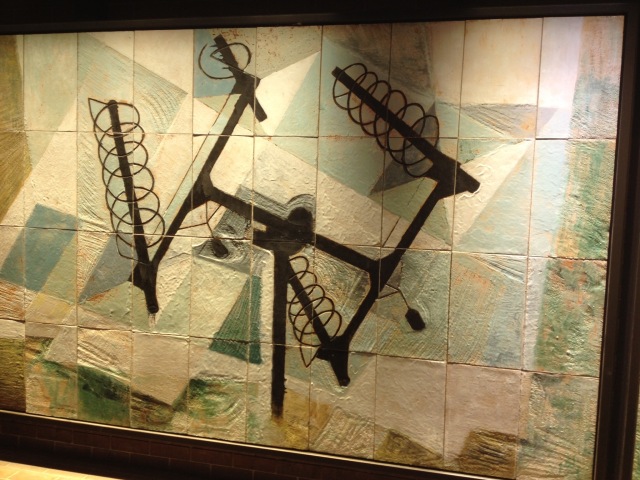 The murals were commissioned in 1960 (at £300 a panel) by the Ministry of Public Building and Works to “add interest at street level” to the Farringdon Street side of the Fleet Building.  So named because of the subterranean River Fleet flowing beneath, the thirteen-storey  glass and concrete block  was built to house the Central Telegraph Office.  Designed under the supervision of the GPO’s Chief Architect Eric Bedford (who later designed the longer-lasting Post Office (now BT) Tower) this was London’s largest telephone exchange boasting 12,000 subscriber lines and employing 600 staff.

Dorothy Annan took her inspiration from the new communications technology. She researched her subject thoroughly, visiting Post Office buildings across London and photographing physical elements of the new technology to incorporate into her designs.

The stylised and abstract panels representing the hardware of communications technology at the cutting edge: cables, pylons, aerials, generators, power lines, is softened by the muted colour palette.

Lines over the Countryside

Each one of the nine panels is a unique work of art and the influence of her contemporaries including Ben Nicholson, Paul Klee and Joan Miro is evident.

The panels are each made up of forty biscuit-ware tiles, each roughly thirty by forty-six centimetres and manufactured by Hathernware Ltd of Loughborough.  Dorothy Annan hand scored each of the 360 wet clay tiles to her own design in the Hathernware studios and, after the first firing, she decorated, glazed and fired them in her own London studio. 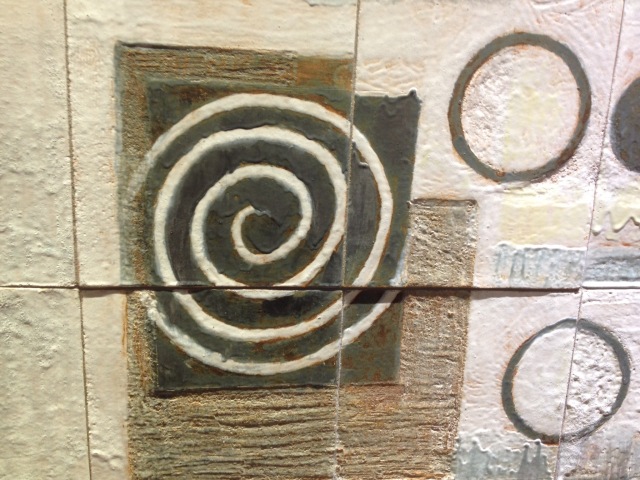 Dorothy Annan (1908-1983) was a ceramist and a painter and is now best known for her murals. Politically left-wing, she was a member of the Artists International Association (along with Paul Nash, Ben Nicholson and Frank Auerbach) whose aim was the “unity of artists for peace, democracy and cultural development. The AIA saw travelling exhibitions and murals as a means of promoting wider access to art. Many functional and utilitarian post-war public buildings like the Fleet Building were brightened up by murals.

Sadly very few survive, Dorothy Annan’s largest work, Expanding Universe at the Bank of England was destroyed in 1997. Her only other surviving work in London – a London County Council commission for Caley Street school in Tower Hamlets – was happily rediscovered in 2008.  The Fleet Building mural was heading for the same fate. The building had been in a state of near dereliction for many years after computerisation superseded telegraph and Telex, and Goldman Sachs  – who had acquired the site to build their new £350m European HQ  – did not initially see merit in the work.

But thanks to a campaign by 20th Century Society and Tile and Architectural Ceramics Society among others, the mural (though not the building to which it was affixed) was awarded Grade II listing by English Heritage in 2011.  In 2013, with agreement of the Corporation of the City of London and a dowry of £100,000 from Goldman Sachs the panels were relocated to Speed Highwalk preserving them for posterity and “adding interest” at highwalk level.

Dorothy Annan mural – looking back from the end

This entry was posted in Hidden Art, Hidden Places, The Blog. Bookmark the permalink.