A version of this post first appeared on the Footprints of London blog.

Section 13 of The Capital Ring between Stoke Newington and Hackney Wick may be one of the shortest but it is certainly richly varied. Most of the route overlaps the Lea Valley Walk.

The River Lea once divided Middlesex from Essex and is now the boundary between the London boroughs of Hackney and Newham and Waltham Forest. The walk follows the towpath separating the River from Walthamstow Marshes. Saved from development in 1980s they are now a Site of Special Scientific Interest as one the last surviving natural marshlands in the London area – a home to over 400 plant species, many small mammals, birds and invertebrates. Once common grazing lands, they are once more grazed in summer, so you may be lucky and see the small herd of Belted Galloway cattle. 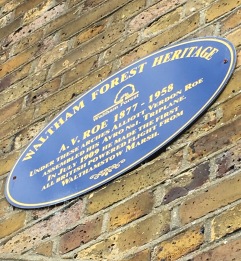 The Yellow Terror,on the other hand, is neither flora nor fauna but the nickname of the tri-plane that A V Roe invented and constructed under the railway arches that cross the marsh. When it flew 900 feet across the Marsh on 23 July 1909 it was the first all-British powered flight.

Now mostly recreational and increasingly residential, this part of the Lea was once heavily industrialised with many timber and furniture factories nearby, now marked only by local street names such as “woodmill” and “larch”. 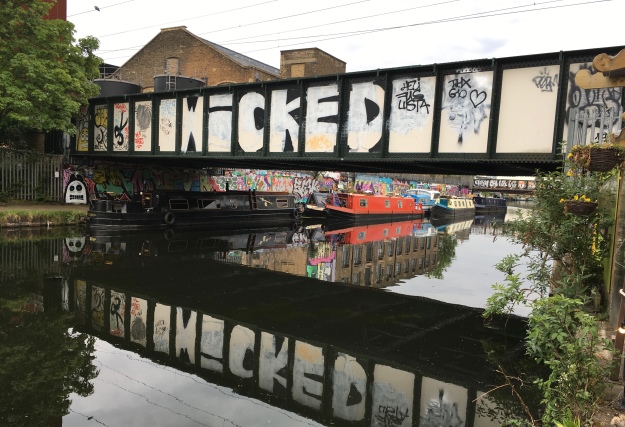 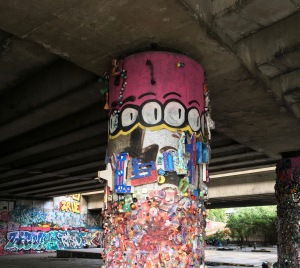 The last leg of the walk follows the Hackney Cut and our surroundings change again.  As we pass along the edge of the Queen Elizabeth Olympic Park to conclude our walk at Hackney Wick we are right back in urban east London with cafes, improvised art installations, graffiti and a few vestigial remains of local industry.

It’s a great walk and there is always something surprising.  The last time I walked along here I was a bit taken aback by some of the “wildlife” I encountered!  Why not join me on 30thJune and see what we encounter.

I recently stumbled across Camden-based, Laura Ford’s 2012 work Cats 1&2.  Situated at the end of Bishopsgate, appropriately close to the junction of Leadenhall Street with Whittington Avenue, these two anxious and distracted larger-than-life size cats are part of a series called Days of Judgement. Ford was inspired by Masaccio’s fresco, The Expulsion from the Garden of Eden in the Brancacci Chapel in Florence, but instead of Adam and Eve, she gives us these tall, thin, distracted and abject creatures.

I started to think about the other London cat statues I know, all of whom serve either to emphasise their human companion’s humanity or serve as a memorial to the humans with whom they are connected.

Hodge, Dr Johnson’s  “very fine cat indeed”, portrayed in Jon Bickley’s 1997 statue with one of the oysters he favoured, gazes out in a very proprietorially feline attitude across Gough Square from his position on a copy of Johnson’s famous dictionary. He is also at good height for visitors to the Square to stroke or drape an arm round. 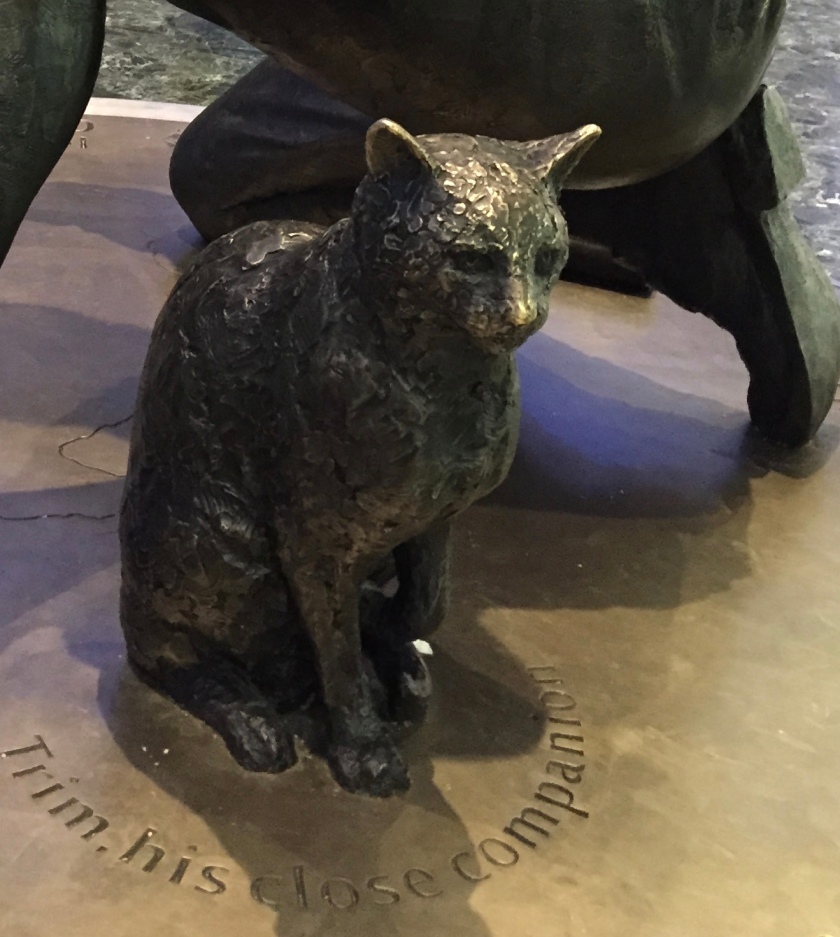 Trim, Matthew Flinders seagoing”close companion” looks as though he has his own interests but seems content to stay close by in the busyness of the Euston Station concourse. 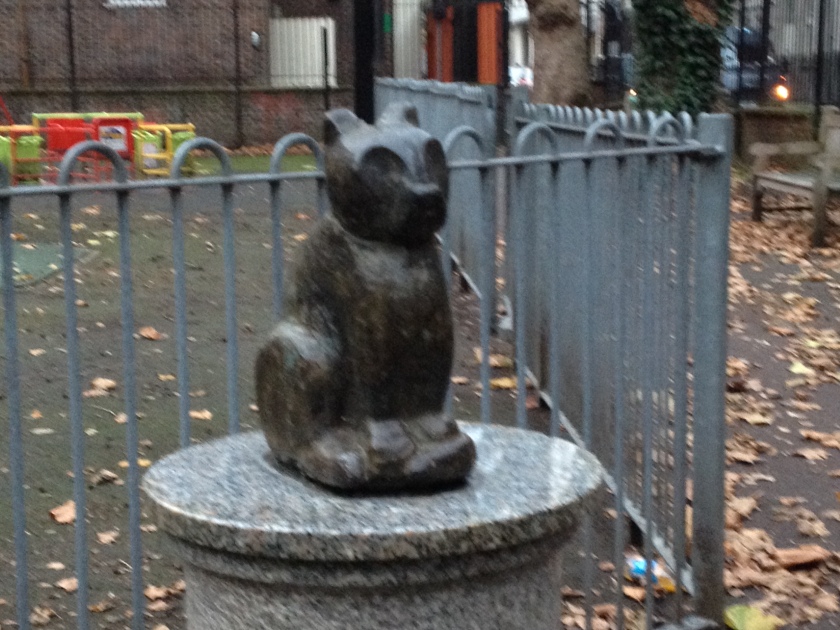 These two Bloomsbury cats were indeed real and local. Humphry, on top, used to live in Queen Square (the statue, that is) but was relocated to the Alf Barrett children’s playground in nearby Old Gloucester Street.  Humphrey, the real cat, lived at the Mary Ward Adult Education Centre the Square. He was named after Humphry Ward, husband of the centre’s founder Mary Augusta (Mrs Humphry) Ward, the Victorian social reformer and novelist.  Humphry is the first and only sculpture completed by Marcia Solway who attended sculpture classes at the Centre and lived nearby. Sadly, Marcia died of epilepsy aged only 34 in 1992. The statue was donated by her mother Carole Solway.

Sam, portrayed jumping down from a wall in a corner of Queen Square, lived with a active local resident Patricia Penn (Penny).  Penny was a nurse,  actively engaged in the local residents association and a campaigner for the preservation of the area’s historic buildings.  The sculpture by John Fuller, was erected in 2002 and funded by local people to commemorate Penny’s life.  The current version is mark two as the original was stolen in 2007. However, Sam won’t be able to jump down from the wall this time as the new sculpture is fixed to the brickwork with steel rods!

The cat in the Salter family grouping at Bermondsey returned  to the embankment wall in 2014 after a spell in protective custody with Southwark Council. Although daughter Joyce and her pet cat were unharmed, the statue of her father, local GP and Labour MP, Dr Alfred Salter was stolen in 2011.  Happily, a fundraising campaign meant that sculptor Diane Gorvin, who created the original trio in 1991, was able to make a new statue of Alfred and  to complete the family grouping with a statue of Ada Salter.  Ada, who had been omitted from the original commission was the first Labour woman mayor in Britain and the  first female mayor in London. An ethical socialist, she successfully campaigned for improved housing and the greening of London through Deptford’s Beautification Committee.

You may like to read more about Trim and Matthew Flinders

Now it’s planted up the top section wouldn’t be much use to any passing horses – but dogs might get a drink from the bottom. This one is at Clerkenwell Green.

There is little animal life apparent in today’s Islington other than domestic pets and squirrels in the Squares. It was not always thus! Even into the twentieth century, horse-drawn transport was still in use in London. In mediaeval times, instead of today’s built-up landscape we would have seen sheep and cattle grazing on the land owned by the great religious houses of Clerkenwell and St Paul’s and watered by the springs water that first drew people to settle here.

Discover how different kinds of animals shaped Islington’s development from open fields to inner city. Find out about the significance of animals for food, trade, transport and entertainment; see what it was like for humans and animals to live so closely together, and how their relationship changed over time.

Before or after the walk, why not visit Islington Museum’s Beastly Islington Exhibition.